Back to all news and events

The amputee's team story – Leaders of the pack

06/25/2019 The Rehabilitation Institute of St. Louis, an affiliation of BJC HealthCare and Encompass Health 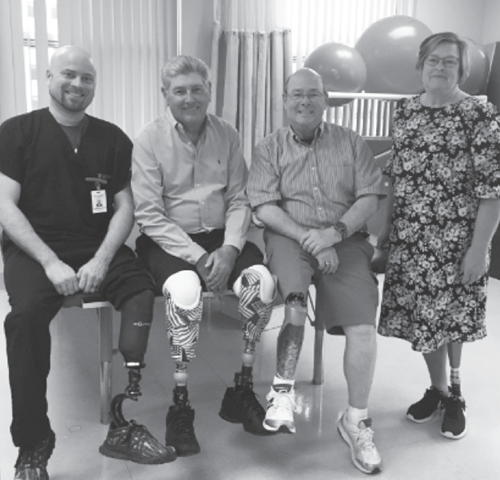 Healing after a life-changing illness or injury often goes beyond expert medical care. Support groups can offer a different kind of healing where medicine and therapy don’t apply. Joining others who share similar experiences, struggles, limitations or emotions provides an environment that fosters encouragement as well as an exchange of knowledge and resources.

Therapists and physicians at The Rehabilitation Institute of St. Louis (TRISL) understand the support process well, encouraging current and former patients as well as community members to attend meetings offered on and off campus. The TRISL amputee team hosted its second annual Amputee Speaker Series during Limb Loss Awareness month in April. Four speakers shared their stories, wisdom, and opportunities for support and mentors in the community. While speakers had their own hurdles to overcome, the takeaway was that no one has to travel the road alone, and life continues to be full of joy after amputation.

Jerod Wexstten
Jerod required a below-knee amputation after a dirt bike accident and was now on his way to celebrate his five-year “ampuversary.” His injury provided inspiration for him to become a prosthetist, and he began working with the prosthetist that made his first prosthetic leg. Jerod’s life experiences as an amputee provide a unique and special bond with his patients. During the speaker series, Jerod shared valuable information about local programs, technology advancements in prosthetic limbs and local peer visiting programs.

Hank Zabielski
Hank lost his first leg in 2004 and, eventually, his second leg several years later due to vascular disease. His determination, hard work and positive attitude allow him to walk without the use of a cane or other assisted devices, and his love for golf further drives his certitude to enjoy an active lifestyle. He reminds the audience that it is ok to cry and going through the grieving process is part of the healing journey. If the weather is good, you’ll find him at the driving range or on the course.

James Simpson
James experienced a lump in his chest and tingling in his foot and leg before they grew numb and painful. Knowing something was seriously wrong, James rushed to the emergency room where a blood clot in his leg was discovered. During the exam, a more grave and immediate danger presented itself; James had a descending aortic dissection. Physicians quickly acted to save James’s life, but the aortic dissection took first priority, causing the blood clot to damage the leg beyond repair. Despite this medical challenge, James decided this unexpected turn would destroy, define or strengthen him. His parting words with the audience? “Let it strengthen you.”

Donna Hackstadt
Donna’s first experience with a prosthetic limb was not successful. But, at the time, she was the mother to two young children and life seemed too hectic to try another orthotic. In 1990, Donna endured a hemipelvectomy after a baseball-sized tumor wrapped around her sciatic nerve. Because her first prosthetic caused her discomfort and pain, she opted to use crutches. The constant use for more than 25 years led to arm tingling and numbness, prompting her to give a prosthetic limb another chance. After successfully completing advanced rehabilitation and gait training at TRISL, she has the prosthetic limb that is right for her. Donna never loses her sense of humor, telling everyone to “put your best foot forward, even if it’s the only one.”